From 18 to 20 October 2013 and from 26 to 28 September 2014, MuSA hosted the film-festival section, welcoming the many enthusiasts of the genre as well as the young and the young-at-heart. “DOCartoon” is an international event (the only one of its kind in Europe) conceived and directed by Thomas Martinelli and dedicated to animated documentary and non-fiction comics. This original and unique event gathers the best animated documentaries and reportages, but also non-fiction comics, where reality is narrated through drawings.
A programme packed with showings, documentaries and much more, with special focus on current events, featuring previews and premieres, talks with authors, journalists and writers on current issues, such as multiethnic integration, the dialectic between justice and legality, neofascist conspiracies, terrorism and liberation movements. Inaugurations of exhibitions and direct encounters with animators, illustrators and scriptwriters in the centre of Pietrasanta have involved shops, galleries, bookshops and prestigious public venues. 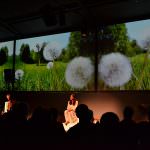 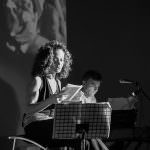 “In Oltre” (“In and Beyond”)Archivio