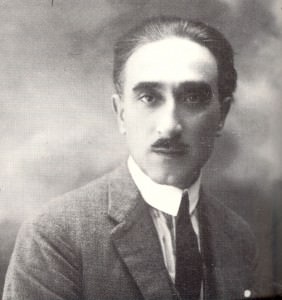 A painter, sculptor and ceramist, in 1902 he attained a diploma in sculpture from the Art School of Pietrasanta. He started to work in local workshops, showing his ability to model clay statues and bas-reliefs which were then created in plaster and marble. His artistic career began in 1908, when he started to display his works at the Promotrice di Belle Arti of Turin. Called to arms in 1915-1918, he interrupted his activity but returned feverishly to work after the war. During this period he created the gravestone bas-relief located in the cemetery of Vallecchia in 1920 in honour of the citizens of Versilia who had fallen in war. During the same years, he was entrusted with several tasks regarding the “monumental works in honour of the Victims of the First World War”: in the piazza in Vallecchia in 1924, at the Delatre Kindergarten in Seravezza, in Piazza Statuto in Pietrasanta in 1925 (thanks to which he won the respective competition in 1922), a bronze bas-relief for the school in Piazza Dante in Forte dei Marmi (later melted “for the Fatherland”), and others also for the cemeteries of Pietrasanta and Strettoia. In the meantime, he met with great success in participating in many competitions for the creation of celebratory works in various towns in Tuscany.
During the mid-thirties he took part in the competition held in Turin for the Monument to “Emanuele Filiberto”, Duke of Aosta, and although it was won by another competitor, his proposal was in part used for carrying out the work. From there, he started to work for clients preferably unrelated to the public sphere: he created works for Cuba and one of his works won “II Prize” at an International competition in Santo Domingo. Some of his other works can be seen in Portovenere (“San Pietro” in the church of the same name), Catanzaro, Lucca and Milan.
Further success arrived in 1934 with the start of a long and fruitful collaboration with “Ceramiche Lenci”, a Turin-based factory of collectible dolls and ceramics, for which he created many models, often signing them with the initials “Aja”.
He went back to sculpture after the end of WWII. In 1946, the municipal administration of Seravezza commissioned him to create a marble bas-relief, “Il Cavatore”, in remembrance of Luigi Salvatori – a well-known representative of the Resistance – currently in the Town Hall. He was the author of further works over the next ten years, such as the “War Memorial” of Strettoia (1954). He worked on the project for the “War Memorial and Monument in remembrance of the Gothic Line” in Ripa, composed of a triptych of high-reliefs donated by sculptor Edoardo Rubino. In 1959, two years after his death, the Town Council of Seravezza dedicated a street to him. His bronze works were cast at Fonderia Mariani in Pietrasanta.