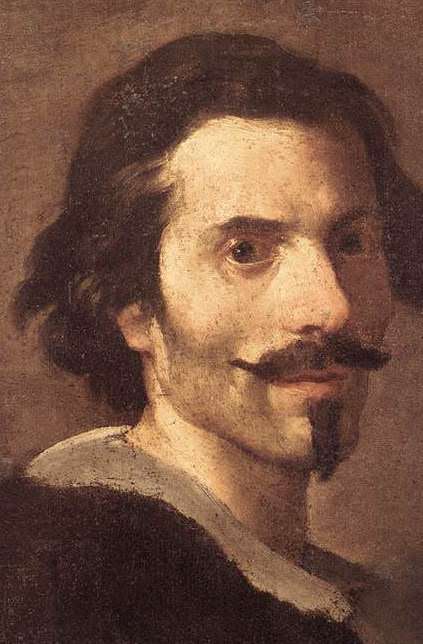 "Rare man, sublime artificer, born by Divine Disposition and for the glory of Rome to illuminate the century"
Urbano VIII speaks about Gian Lorenzo Bernini[/mk_fancy_title]
Biography

Son of a Tuscan sculptor, he was introduced at a very young age to Cardinal Scipione Caffarelli-Borghese, the father’s protector in Rome. He hence received his training in the fervent Roman circuit of the time, inspired by Caravaggio and the Carraccis, rich in occasions to meet with other artists coming from throughout Europe. The works from his youth – between 1616 and 1624 – are a clear expression of the Baroque style and include some undisputed masterpieces, all commissioned by Cardinal Borghese. Among them, the group Apollo and Daphne, in white marble, today located at Galleria Borghese, stands out. The Numph is depicted in the act of transmuting into a laurel tree, thus fleeing from the impossible love of the god Apollo, pursuant to the myths told by Ovid in “Metamorphoses”. That same commission also included the first “Aeneas, Anchises, and Ascanius” and “The Rape of Proserpina”, these, too, inspired by mythology and by classical literature, and David, a biblical figure.

The artist’s predilection for representations that recreate a movement, for the naturalistic detail and the virtuosity of the forms is clear from the very beginning. These characteristics contributed to his fortune as portrait painter. In1623 Pope Urban VIII, Maffeo Barberini, was elected and from the start of his papacy, showed the desire to undertake ambitious urban projects, using art to communicate the political propaganda of the Church as the winning power. He commissioned a very young Bernini – for whom he nurtured great esteem – to make St. Peter's Baldachin, to be placed as monumental symbol to the tomb of St. Peter inside the Roman Basilica. The work was completed and inaugurated in 1633.

In 1627 he began construction of the funerary monument for Urban VIII, that became the prototype of the Baroque tomb. The monument was inspired by Michelangelo, and permeates with strong symbolism: the Pope’s hand blesses the people in front of him, and laterally, the personifications of Charity and Justice and between them is the representation of Death, it, too, paying homage to the glory of this person. In the course of these years, he worked together with his father Pietro, under Papal commission, on the Barcaccia Fountain for Piazza di Spagna, part of the works of the Acqua Vergine aqueduct curated by Pietro himself. Another important fountain for Barberini’s propaganda was his the “Triton Fountain” for the homonymous piazza located behind the papal family’s recent palazzo.

In 1644, the reins of power changed. With the death of Urban VIII, the Pamphilj family rose to the Vatican with Pope Innocent X, changing also the artist’s fortune who did not meet the new pontiff’s favour. The “Transverberation” or “Ecstasy of Saint Teresa”, with which he attained the highest levels of pathetic expression, belongs to this period. Relationships with the new papacy improved to the point that he was entrusted with creating the “Fontana dei Quattro Fiumi” in Piazza Navona, between 1648 and 1651. The obelisk that towers over the sculptures is taken from the Circus of Maxentius, that apparently seems to have no points of support, pursuant to a device expressly designed by Bernini; the allegories of the four rivers – Nile, Ganges, Danube and Rio de la Plata – can be interpreted as the symbol of triumph of the Church over the four parts of the world. Once again, art production aimed at political propaganda. In 1655 a new pope, Alexander VII, and a new great Roman family came to power: the Chigi family. This Pope was a lover of the arts and gathered around him a multitude of artists for the reconstruction works of the city.

Bernini works on the inside and outside of Saint Peter’s Basilica for a long time, designing for example the composition hosting the famous Chair of Saint Peter, a wooden throne dating back to medieval times having a great symbolic value. The external works are the grand elliptical columns that define the piazza, dated 1656 and crowned by 140 statues of saints. Nothing about this project is random, everything answers a precise communicative intention and an ideological motivation, starting with the oval shape of the piazza, of cosmological origin, transmitting that it wished to “reach out with open arms to embrace Catholics in order to reaffirm their belief, heretics to be reunited with the Church, and agnostics to be enlightened with true faith”. For the Chigi family, he worked on the decors of the chapel of the Basilica of Santa Maria del Popolo, with the statues of Daniel and Habakkuk and the angel; he built the Collegiata dell'Assunta ad Ariccia and the Parrocchiale di San Tommaso at Castel Gandolfo; in 1666 he designed the placement of the Elephant and Obelisk; he expanded the Papal Palace to the Quirinal Palace.

His is the idea of the tomb designed expressly for Alexander VII. It is a funerary monument very different from that of his predecessor’s, Urban VIII: here, the Pope is depicted in the act of praying, the allegorical figures of Charity and Truth in the forefront accompanied by two other figures of great importance, Justice and Prudence. In the same way, Death is no longer an almost subordinate figure but is instead represented in its true essence of the ultimate passage from present life, bearing an hourglass. The tone of the entire group is more intimate and devoted to prayer. Clement IX Rospigliosi was another pope for whom he sculpted statues of angels to be placed along Ponte Sant’Angelo, bearing he symbols of the Passion of Christ. In 1674 he created “Ecstasy of Blessed Ludovica Albertoni”, beatified by the subsequent Pope, Clement X, in the church of San Francesco a Ripa. It is a known fact that for his sculptures, Bernini used marble coming from the quarries of the Apuan-Versilia area, the quarries strongly championed by Michelangelo. 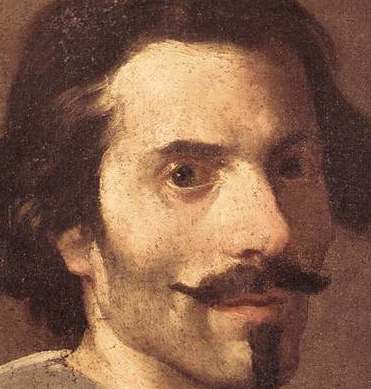 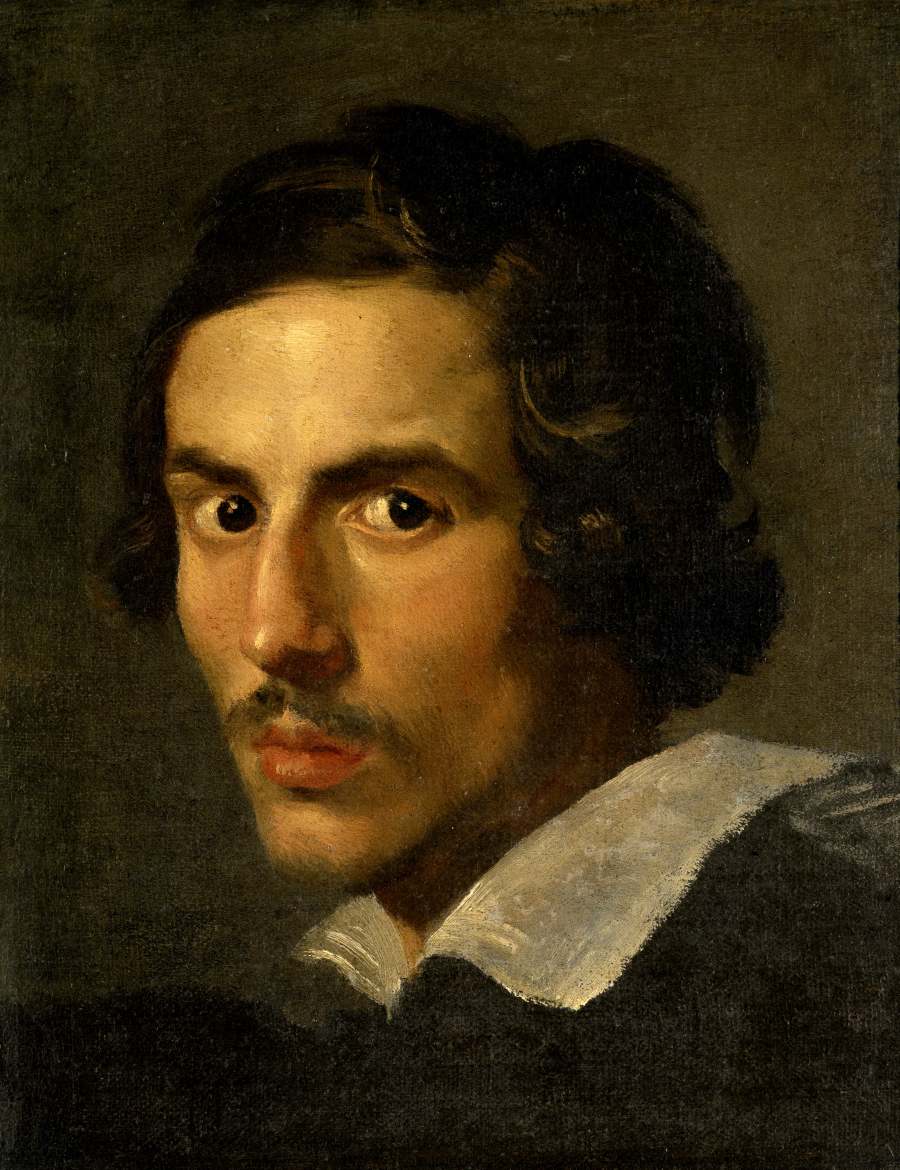 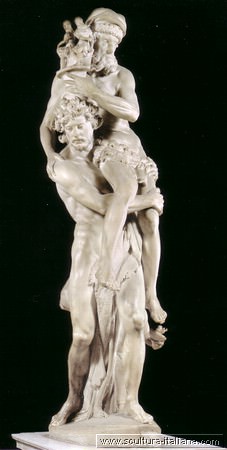 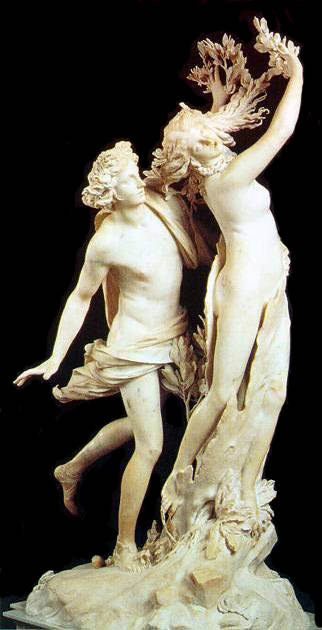 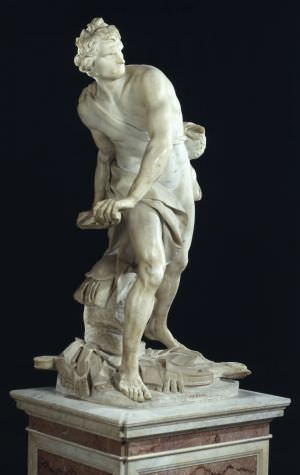 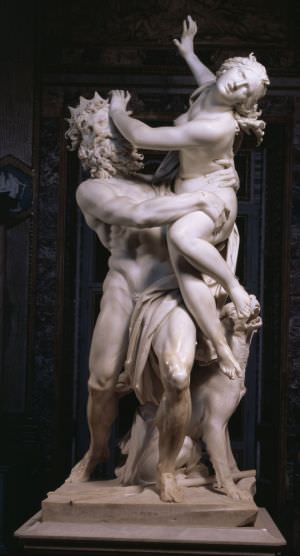 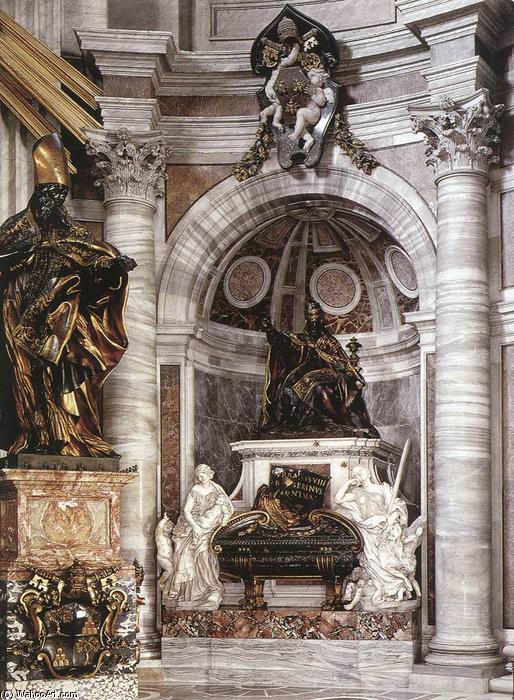 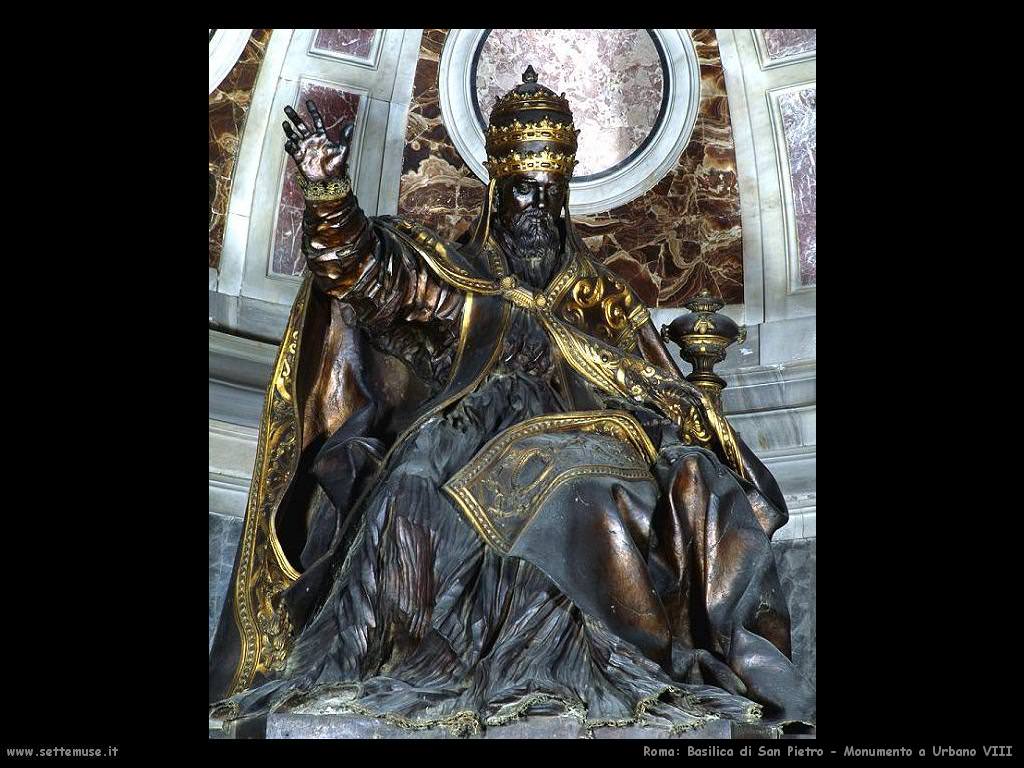 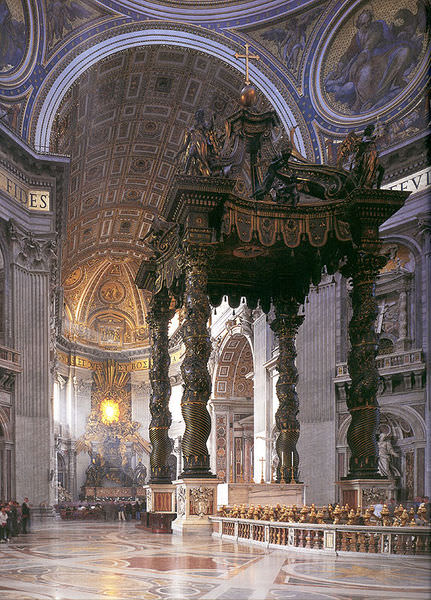 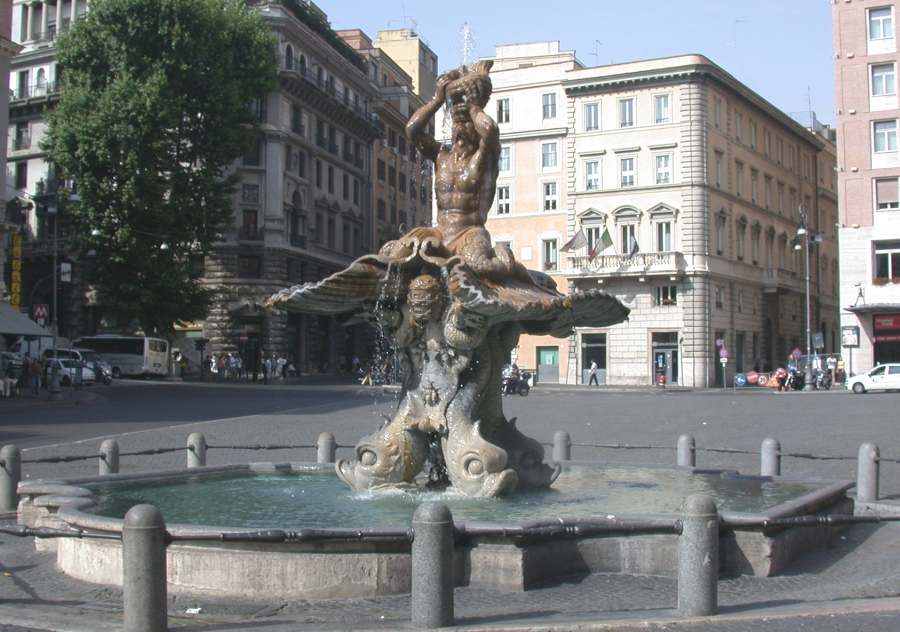 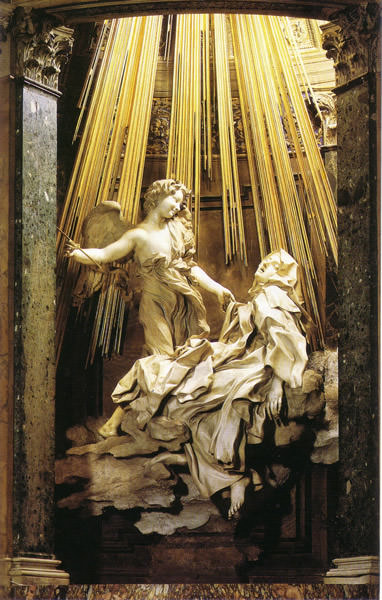 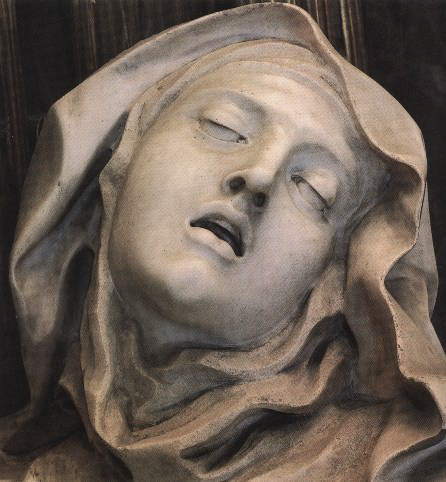 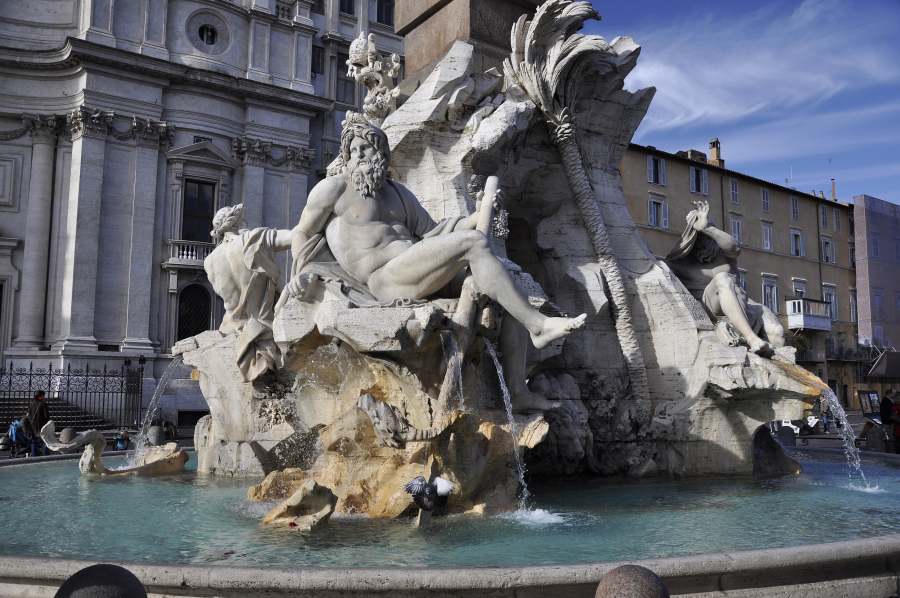 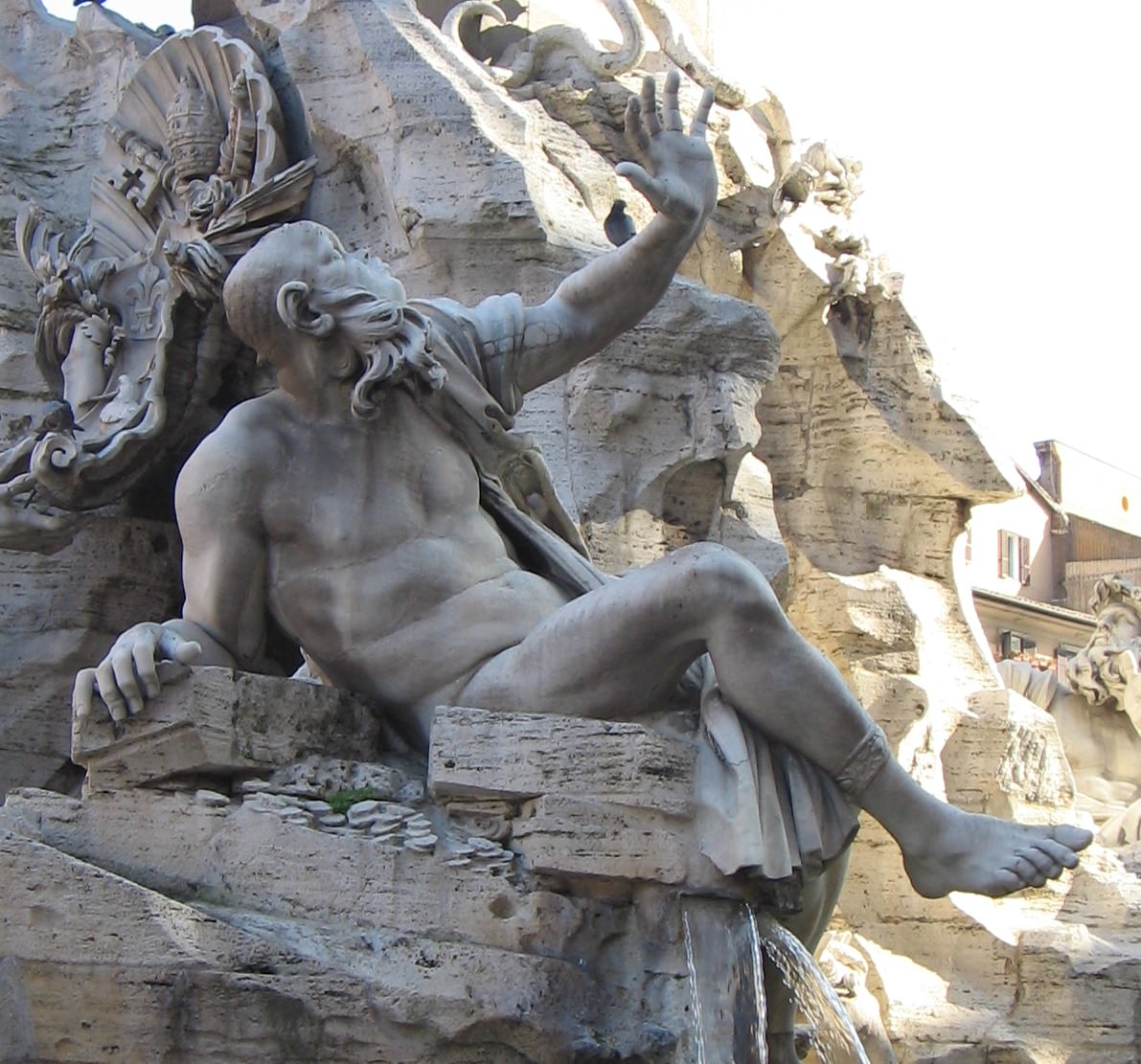 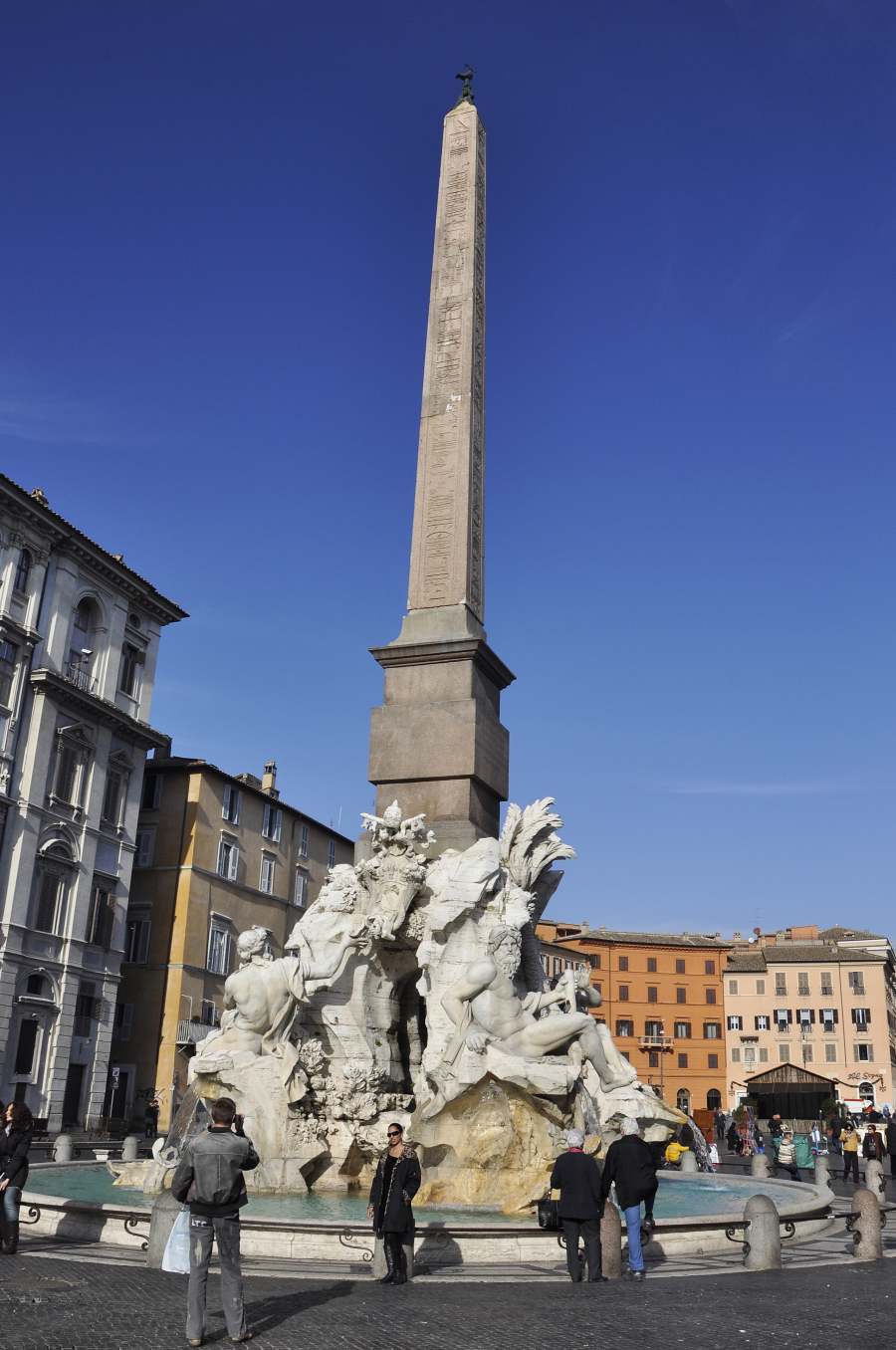 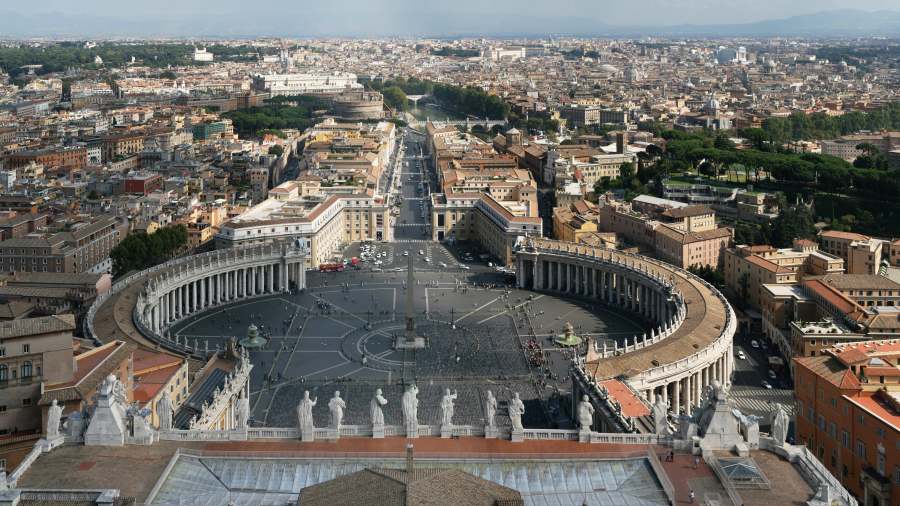 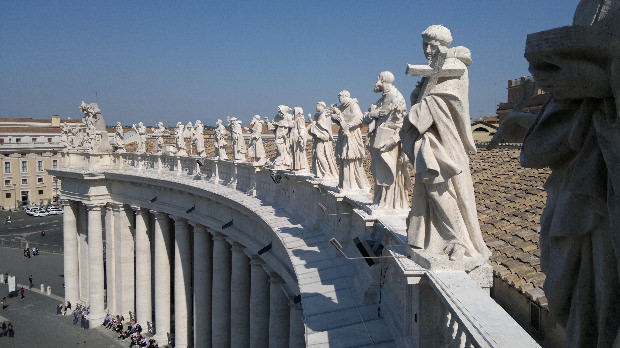 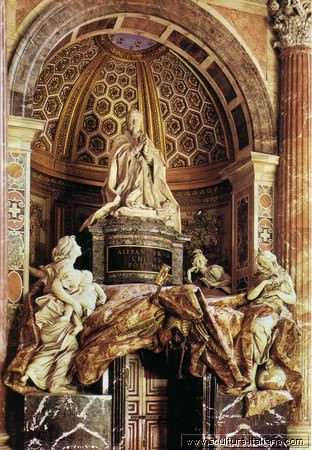 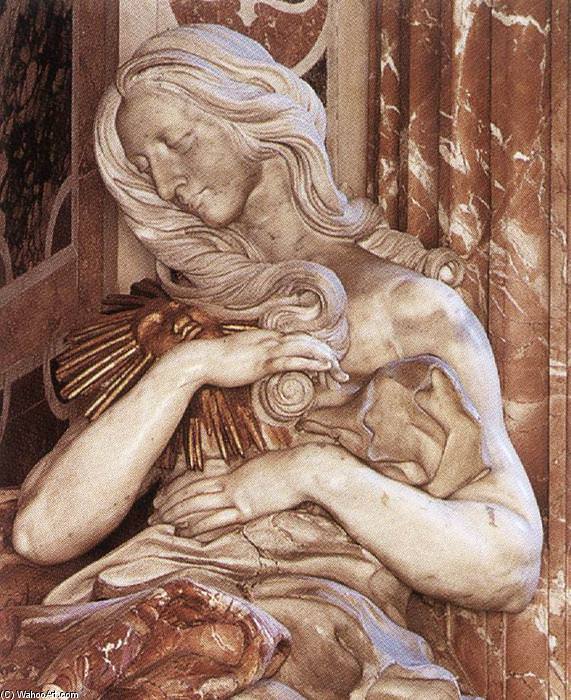 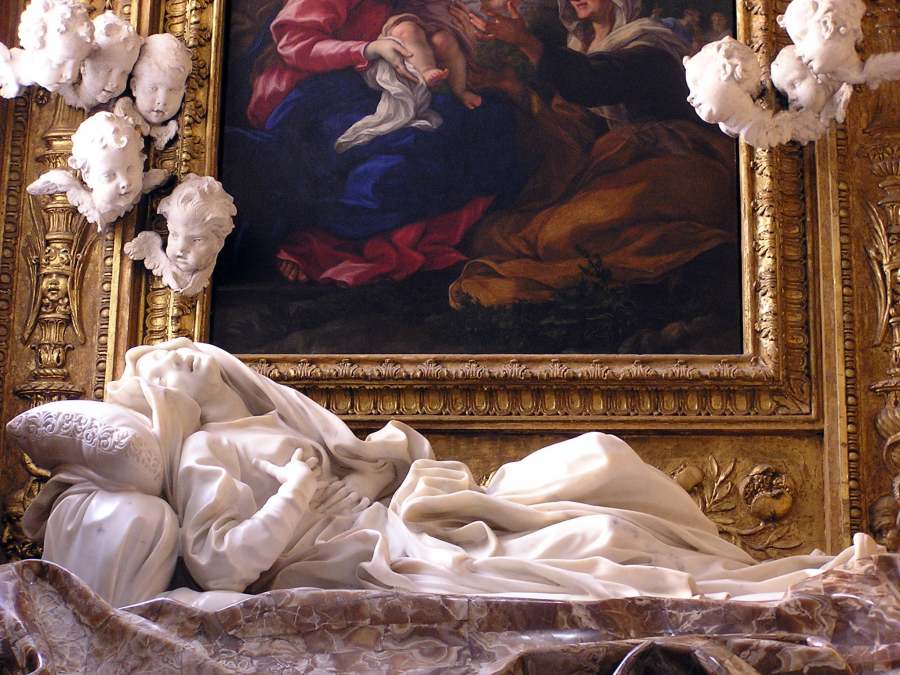 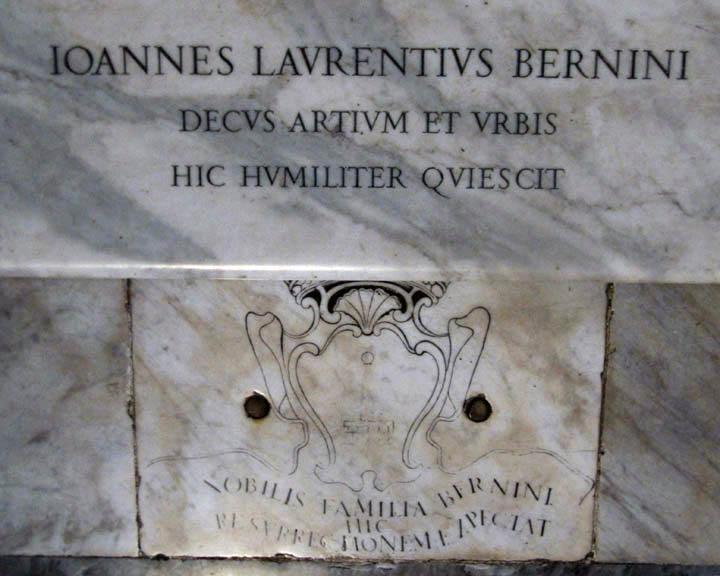