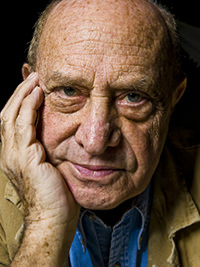 "Today I think of my sculptures as crystals, or nuclei, or as eyes or signal fires; and I see them as relating to borders and journeys, to the worlds of complexity and imagination"
Arnaldo Pomodoro

Arnaldo Pomodoro was born in Morciano di Romagna in 1926 and spent his childhood and youth in Montefeltro.

His works can be seen in large squares (Milan, Copenhagen, Brisbane), in front of the Trinity College, Dublin University, at Mills College, California, at the Department of Water and Power in Los Angeles, in the Cortile della Pigna in the Vatican Museums and in the world’s largest public collections. In 1991 his "Disco Solare", a gift from the Prime Minister’s Office to the Soviet Union, was installed in front of Moscow’s Palace of Youth; in 1992 a large work entitled "Papyrus" was installed in the gardens of the new Posts and Telecommunications Building in Darmstadt, Germany. In 1995 the Municipality of Rimini commissioned him to make a sculpture in memory of Federico Fellini; in 1996 the work "Sfera con sfera", with a diameter of 3.30 metres, was placed in the United Nations square in New York. In 1998 he received a commission to create the portal of the Cefalù Cathedral.

His most important exhibitions were held at the Rotonda della Besana in Milan in 1974, at the Musée d’Art Moderne de la Ville de Paris in 1976, at the Forte Belvedere in Florence in 1984, at the Palazzo dei Diamanti in Ferrara in 1987, at the Hakone Open-Air Museum in Japan in 1994, at the Rocca Malatestiana in Cesena and at the Museo della Città in Rimini in 1995, at the Marlborough Gallery in New York in 1996 and in San Leo in 1997. He has held travelling exhibitions in important American museums (University Art Museum, Berkeley, California, in 1970-71 and Columbus Museum of Art, Columbus, Ohio, in 1983-1985) and also in Europe, Australia and Japan.

He has taught in the art departments of various American universities: Stanford University, University of California, Berkeley and Mills College. Since 1990 he has directed the TAM youth training centre, set up in cooperation with the Municipality of Pietrarubbia nel Montefeltro.
He has received the following awards: San Paolo in 1963, Venice in 1964, one of the six Carnegie Institute International prizes in 1967, the Henry Moore Grand Prize in Japan in 1981. He received the Praemium Imperiale 1990 for sculpture from the Japan Art Association (Leonard Bernstein won the prize for music, Federico Fellini for cinema and theatre, James Stirling for architecture, Antoni Tapies for painting).

In 1992, Trinity College, Dublin awarded him an Honorary Degree in Letters and the same year he received the UBU Prize for the stage design of Koltes’ work "In the Solitude of Cotton Fields". In 1993 he received the title of Honorary Member of the Brera Academy, Milan. In 1994 he received an award from the Prime Minister’s Office as part of the "Big Millennium" study days organized by the Centro Pio Manzù. In 1996 he was nominated Knight Grand Cross of the Order of Merit of the Italian Republic.

He has also worked on stage designs, especially for major theatrical performances: Rossini’s "Semiramide" at the Rome Opera in 1982; the Gibellina "ruins" in 1983-1985 for Isgrò’s adaptation of Aeschylus’ "Orestea"; Marlowe’s "Didus" in 1986; Gluck’s "Alceste" at the Genoa Opera in 1987; Stravinsky’s "Oedipus rex" in Siena in 1988; the "Passion of Cleopatra" by the Egyptian poet Shawqi, in the summer of 1989; Genet’s "The Screens" in 1990; Koltes’ "In the Solitude of Cotton Fields" in 1992; "Più grandiose dimore" by O’Neill and "Oreste" by Vittorio Alfieri in 1993; "Stabat Mater", "La passione secondo Giovanni" and "Vespro della Beata Vergine" by Antonio Tarantino and "Moonlight" by Pinter in 1994-1995. In 1996 he created the stage designs for Eugene O’Neill’s "Plays of the Sea" and Jean Anouilh’s "Antigone". In 1998 he created the stage designs and costumes for Shakespeare’s "Tempest". He has lived in Milan since 1954 and has his studio alongside the docks in Porta Ticinese. 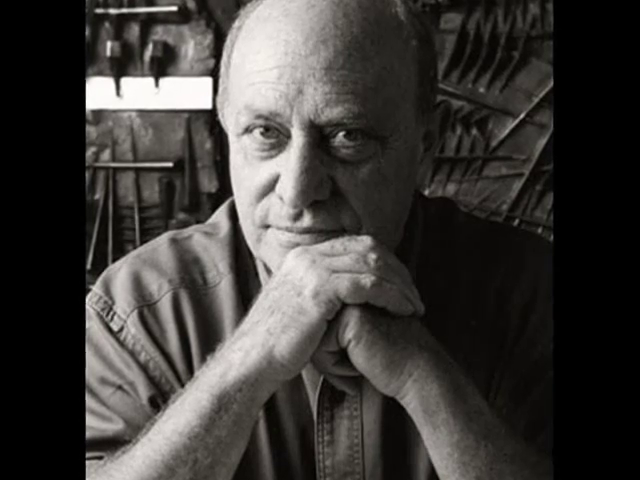 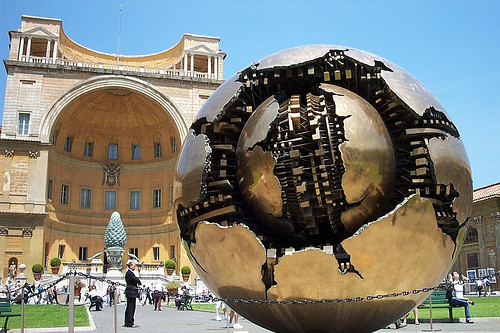 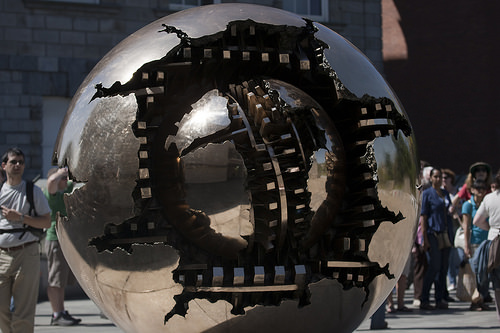 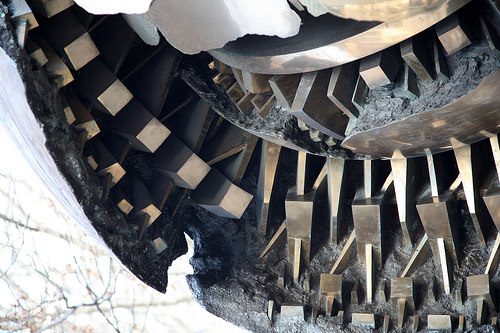 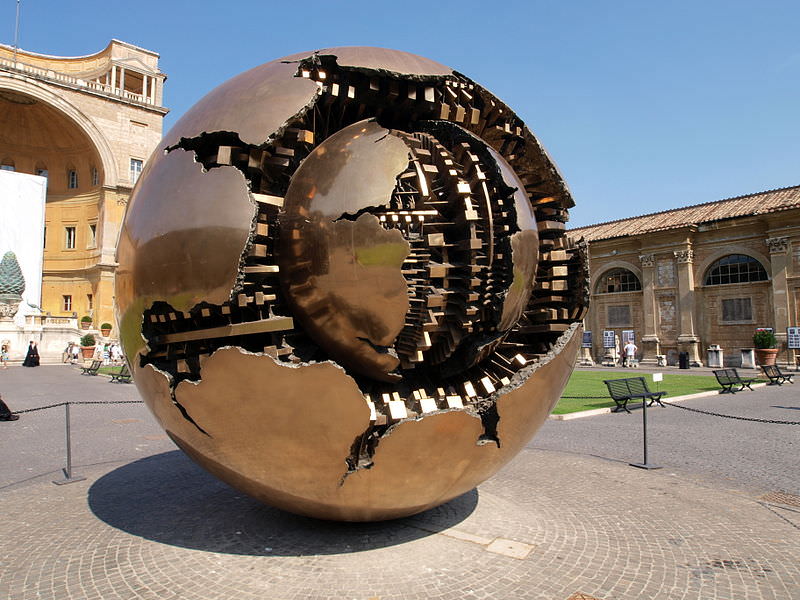 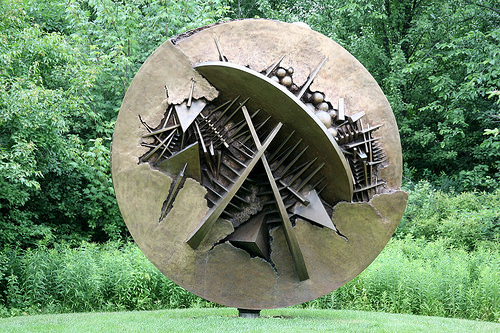 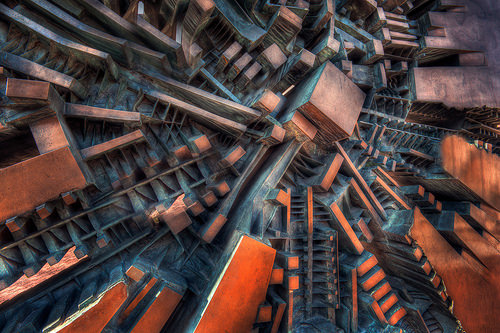 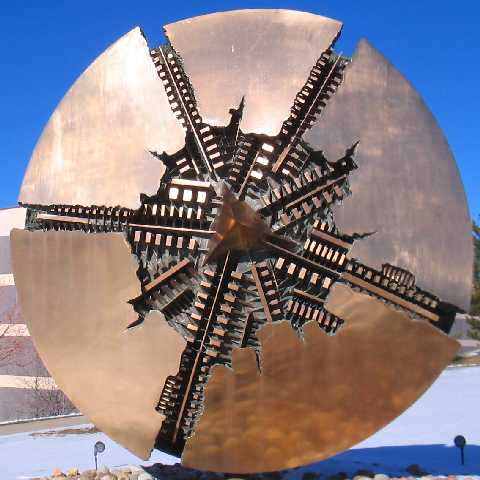 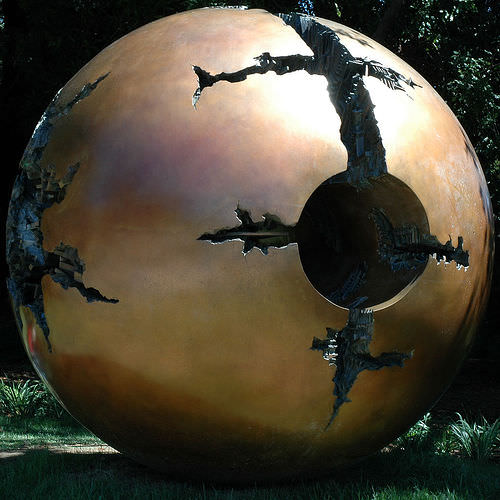 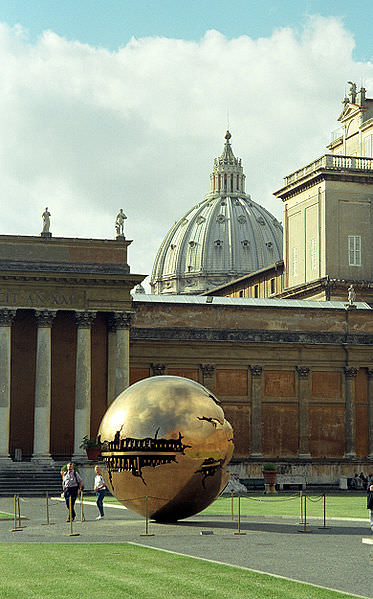 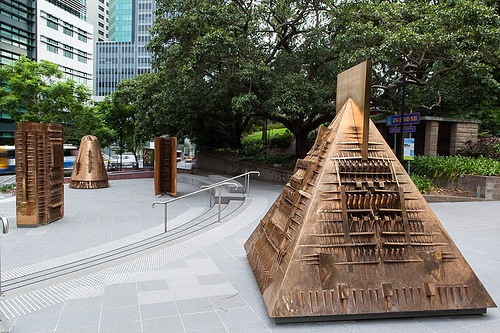 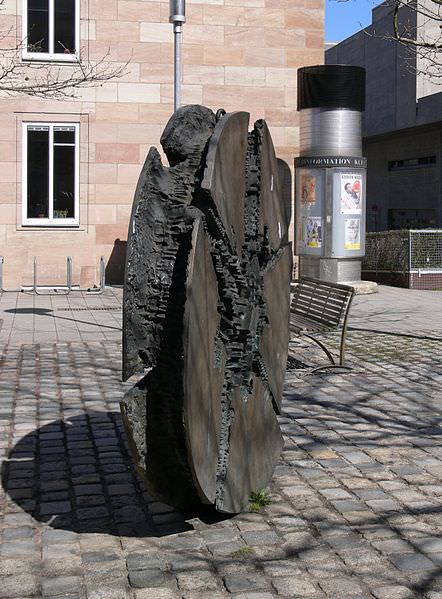 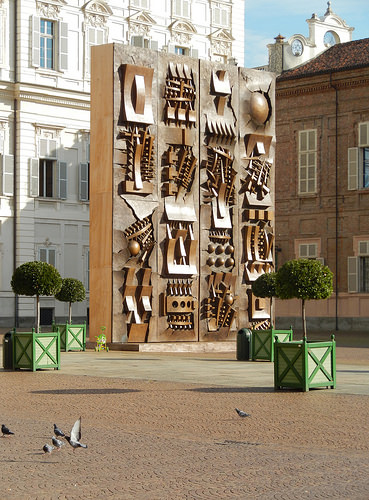 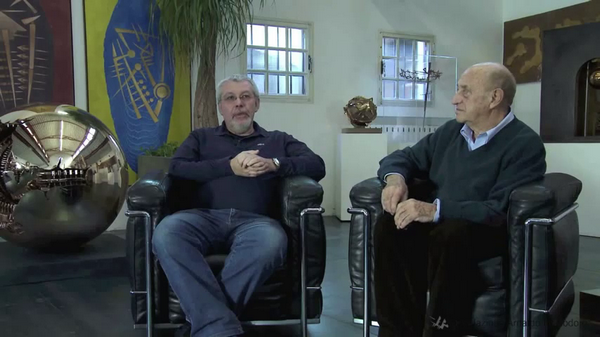 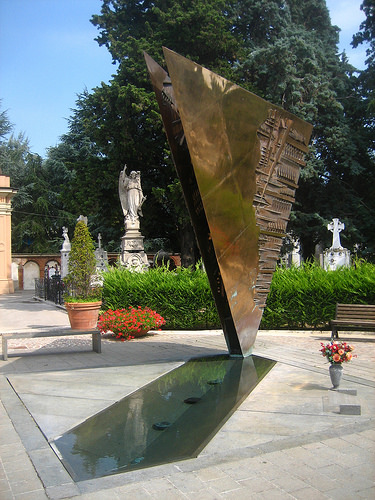 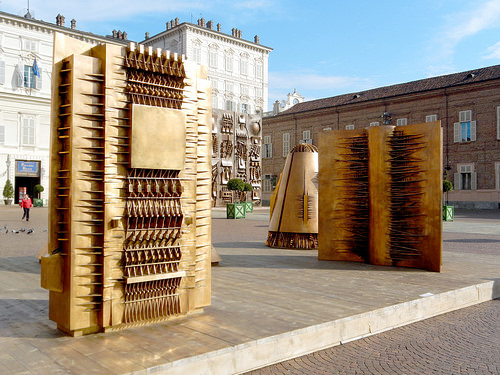 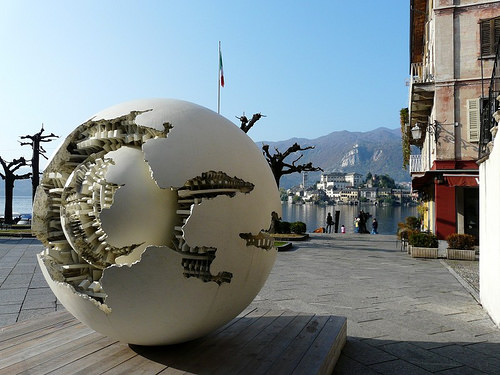 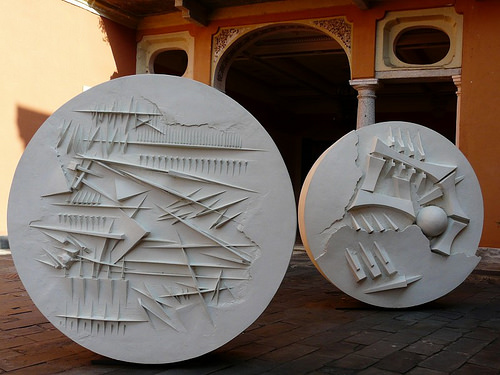 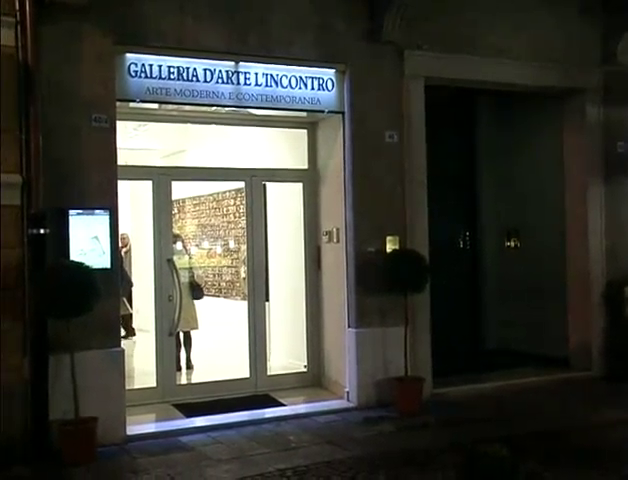 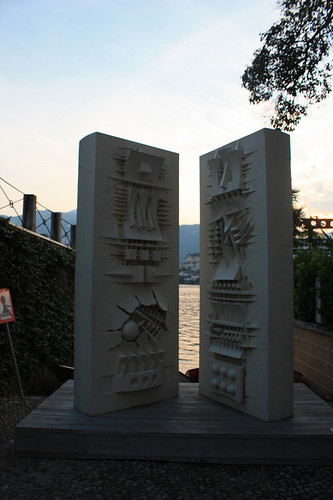 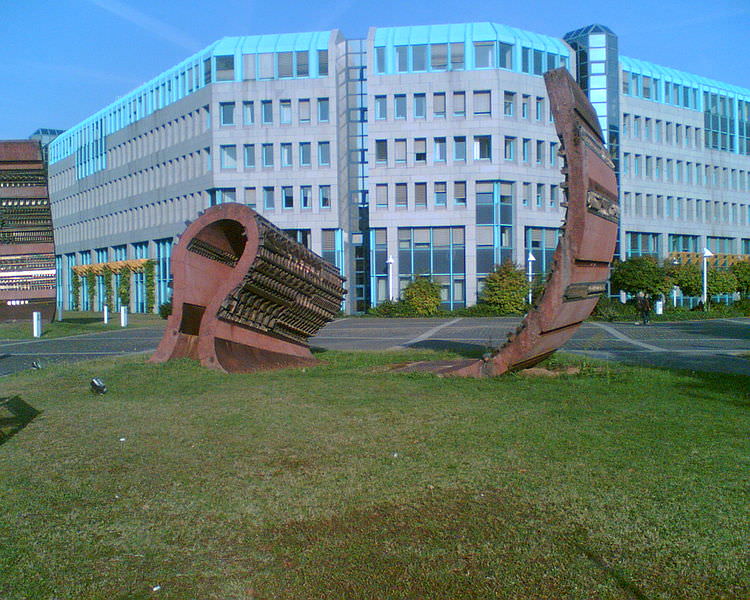